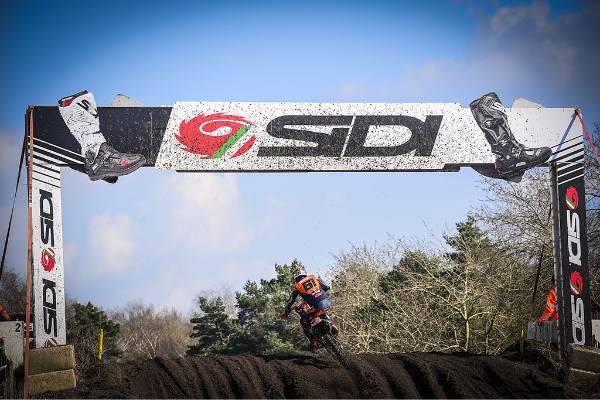 Jorge Prado  is only eighteen years old, but he has already made history. Last season he became the first Spanish athlete to win the MX2 World Championship twice in a row, claiming 31 GPs altogether. The wunderkind from Lugo (Galicia) started to ride a motorbike at age three and won his first race at seven. A bright career that the Sidi squad is accompanying passionately. In 2020 he should have made his debut in the MXGP with his close buddy, Tony Cairoli, but the lockdown has put off his racing toward his dream. In the meantime, we have asked him to tell us something about his sensational 2019.

Last season was simply perfect. The most exciting memory was undoubtedly the GP of Sweden. For sure, it cannot be viewed as one of my best races, but it’s there I conquered my second World Champion title, two races before the end of the season. In 2019 I secured  12 pole positions and 14 victories and then… the World Championship! I don’t have the words to describe how I felt that day, when I realized that I had succeeded in getting such a prestigious achievement for the second time. I couldn’t believe it. I lived the dream I hope I will never wake up from. Last year I was under a huge pression, sure. It’s never easy to be reconfirmed as a champion but, in spite of that, I tried not to change my identity. I knew I wanted to keep focused every single moment, trying not to make any mistake. The debut in Neuquen is always very exciting. The many Argentinians fans are impassioned, and I love the course – it’s fun, especially the waves. Like in all Championship races, how you start off is key to the victory. Staying up front when you are the favourite is always complicated, bit it’s also a good reason to do my best. After the accident in the training this past winter, I couldn’t wait to be back on the track, but I guess now the situation is as uncertain as ever. We must resist and be patient. Here in Galicia we say, “a mal tiempo, buena cara”. You need to be optimistic, even in tough times.