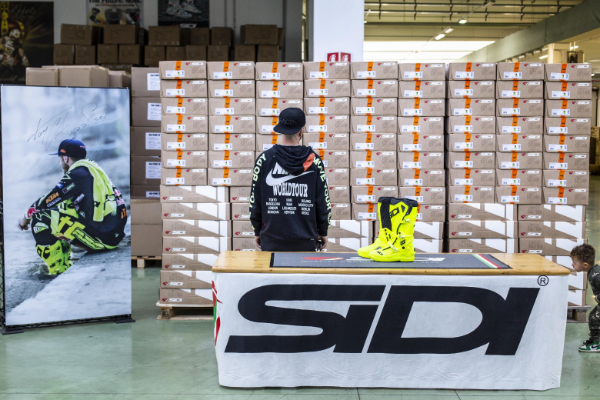 You could say it was a world day in terms of the number of world championships won by the welcome guests visiting Sidi today, 24 altogether with 10 of Stefan Everts, 9 of Tony Cairoli, 4 of Harry Everts and 1 of Mattia Guadagnini in the Jr. category. Amidst autographs, routine photos and a peek at what's new behind the scenes, emotions, memories and many laughs were shared celebrating the Motocross champions supported by the Treviso-based company.

While Tony Cairoli was busy signing lots of autographs on photos and boots, also in view of the charity auction that will see him in the spotlight soon, we had a chat with Mattia, a young guy with overwhelming energy and great desire to learn. He knows that he is in a privileged position and is envied by many, as he is aware that racing alongside a champion like Cairoli is absolutely uncommon. 'I'm a mega fan of Tony's: if seeing him in person was crazy for me, I can assure you I can't describe what it's like to race together. It's just incredible, says the young rider. 'I try to learn as much as I can from this experience. He is exceptional. Training together is a dream, and I will treasure this experience.' Mattia has breathed motocross air since he was following his dad to the circuits. He got his first bike at 4 and, from there, he progressively won the Jr World Championship, the Italian Championship, and the European Championship in 2019. '2021 was my first year in MX2. I didn't have high expectations because everything was new, opponents included. It was supposed to be the year to gain experience, but in the end it went better than I expected,' continued Guadagnini. 'Now I'm fourth in the standings, the fight for the podium is still open and, although I feel satisfied, I will certainly give it everything I can until the end.'

After being swept away by the young talent's enthusiasm, we spent some time with a motocross legend and the family that has made this discipline a tradition, the Everts. Next year, Liam will join the official Gas Gas - KTM team and says: 'I don't have a lot of expectations at the moment, I just want to have a good winter where I can prepare as well as possible. For sure, joining a team will be a great achievement, I'll have teammates and I'll try to learn as much as I can so I can express myself as soon as possible' he concludes.

‘I will continue to help Liam and guide him as much as possible so that he can achieve the results he wants. I will definitely be always by his side, confirms dad Stefan, a multiple world champion, who is immediately backed up by Harry who reiterates his position to stand by his nephew for whatever he needs to achieve his dream.

This year, another champion from the Sidi family concludes his incredible career without having to recriminate anything and briefly recounts the years he spent at the top of the world. ‘The World championship in 2005, was the most complicated one, because of the lack of experience and the pressure. In 2017, I remember fighting throughout the championship, it was very challenging but it ended in the best possible way,' confides Cairoli. 'Motocross has given me a lot, I'm happy with how it went with the experience I had, and I'm happy with the opportunity Sidi gave me to work with them. I didn't just wear their boots, I experienced them totally, so much so that I took part in the development of some of them, the Atojo for example, which I am absolutely satisfied with. It was a nice change in style, comfort and efficiency. I consider them an evolution of the boots I used before. We were trying to improve the contact with the motorbike, we wanted to emphasize it even more and we succeeded. I don't think I would change my boots

now,' he confirms. And what if Chase wants to be a rider? ‘I won't stop him, but I won't insist on that either,' he concludes, smiling.

Although each of them has a distinct and well-defined personality, they all agree on what their boots have to offer and have no doubt in describing them: comfortable, lightweight and highly protective.