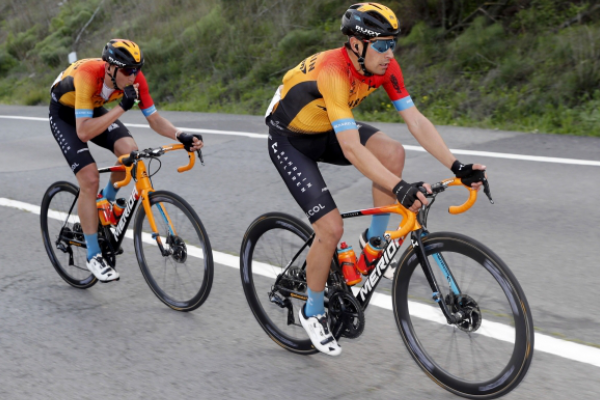 Mikel LandaHe’s 30 years old and made his debut as a pro in 2010 with Team Orbea. In 2015, he won two stages in the Pink race. In 2017, he won the Vuelta a Burgos and wore the best climber’s blue jersey at the Giro. Currently, he rides for Team Barhain-McLaren.

The Giro d’Italia is the most beautiful race on the cycling calendar, both because of its route and the fans’ passion. Every time I am at the start, I always feel a special sensation and I always have fun whenever I am participating in the Giro. It might sound strange to hear it from somebody like me, because the climbs are always associated with effort and suffering, but attempting to conquer the victory makes me feel alive and thrills me.

In 2015, I secured my first victory in a Grand Tour – the Giro d’Italia, in fact – and it was a real surprise. I had lost a lot of weight and had worked hard to achieve that form. I remember I was very focused. I was hunting the victory, but I didn’t expect it could come on that very day. Besides, nice things are almost always unexpected, even when you have fought strongly and for a long time to get them. Furthermore, climbers are the “romantic” side of cycling, and I’ve always experienced the fond support of the fans standing along the mountain roads… let alone when I was wearing the blue jersey at the Giro. For me it was very important to be acknowledged in that role. It belongs to me, and I was extremely proud to be wearing that jersey in Milan. No other words can say that.

Being an authentic Basque, I have a passionate personality that has also contributed to my personality as a rider. My fans coined the term “landism” to describe a free and instinctive racing style, and I am happy to excite them in this way. I love it. It’s my way of seeing cycling. It’s natural to me, and I feel fully accomplished. My future goals... I expect myself to be very competitive when races will resume. I am training thoroughly and crave to be back racing. Cycling can be stopped for a while, but passion never stops flowing through our veins.