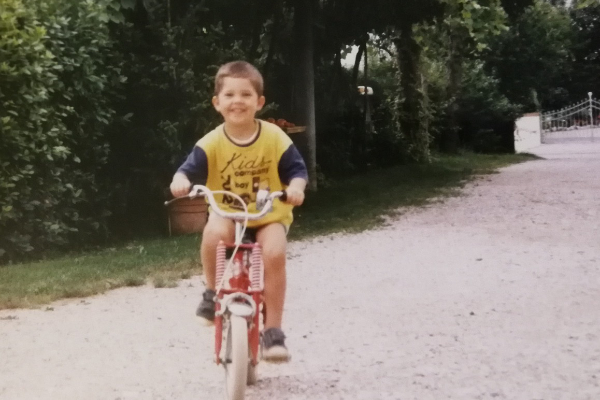 I was a child and I did not notice that the one rider who was to become my cycling idol - Marco Pantani - had just dashed in front of me.

I have always played football and watched cycling on tv with my father. My first memories date to the 2003 World Championship, when Igor Astarloa surprisingly claimed the victory. If I think about it, I can see myself sitting on the sofa with my dad who hoped that Paolo Bettini would come up front again.

I have started to follow this sport since 2005/2006, with Contador - aka “the Gunman” -, the Men'šov-Di Luca duel, the Schleck brothers’ attacks at the Tour, the return of Ivan Basso, Vincenzo Nibali with the Liquigas jersey on as he attacked Wiggins at the Tour and Froome thwarted his attempt. And then, the Monument Classics when Boonen and Cancellara were rivals. Finally, Bettini’s two gold medals at the World Championships and his Olympic gold medal, as well as Ballan becoming the new world champion in Varese.

One day, I was working with my great-uncle and we were discussing a stage uphill finale at the Tour de France. He blurted out in dialect: “Se jera Pantani, li varìe magnai tuti” (had Pantani been there, he would have blown all of them away). That name rang a bell, but I had to look up who he was and I realized that my great-uncle was definitely right: Pantani had been super strong.

In 2014, I rode a mountain bike from the 1980s up to Malga Ciapela with a friend. A fairly easy 9km climb, but it was the first time I tested myself on that kind of terrain. Once we got there, I climbed further up but surrendered at the bottom of a terrible straight section. Back home, I settled on reaching that summit soon or later. So, two years later I was confronted with the Fedaia Pass. A three-hour climb in a terrible physical shape: I suffered pretty much but this ordeal made me aware that with training and the right equipment I would be able to get some satisfaction.

In the course of the years, I raced in cycling during the summer when the football championship was over, doing a couple of climbs every year: Falzarego, Giau, Pordoi, Tre cime di Lavaredo, Fedaia, Sella.

In 2019, because of some back problems I quit playing football and wondered which sport I could practice. In March 2020, I found a second-hand bicycle through a friend of mine. Although Covid-19 had upset the whole world, including cycling, I had learned that in June Deceuninck – Quick-Step were going to have their training camp in the Dolomites and their accomodation was on the San Pellegrino Pass, which I had decided to climb. Two days before my enterprise, my father called to tell me that Alaphilippe and his team were on the Pass. My bike had just arrived and, as soon as I saw it, I realized it was going to become my fellow adventurer. The bicycle was matte black with white logos: my first authentic racing bike.

That Sunday, I rode up to the Pass and it felt like flying. I waited for the team to come back from their training to take some photos. In the meanwhile team Trek Segafredo with Vincenzo Nibali just rode in front of me. It was a wonderful surprise and I caught the chance to shoot a selfie with the Shark.

In October I succeeded in doing the Four Passes Tour. It was a magnificent experience that I’m definitely going to do again. That is how, since winter 2020 I have started to practice this sport seriously and I currently try to ride 50km every week by myself or with friends, waiting to climb the Dolomites again this coming summer and, hopefully, being able to ride an iconic climb of the Giro d’Italia: the Stelvio Pass.