You’d think growing up in Poland meant moustaches and Pierogi, but my childhood mostly meant moustaches and a lot of mischief. My brother and I - he’s one year younger, a big deal at the time) would run out of the door straight into the National Parks and spend endless days climbing trees, falling asleep in sandpits and riding wonky bikes down irresponsibly steep hills. As soon as the wild boars left the kids would arrive, causing even more trouble than the wild boars.

One of the earliest memories was a boiling hot day, a bumpy sandy road and clouds of dust in the air – you just couldn’t see anything. You also really thought you’re invincible, and considered brakes to be mostly for decoration - something to tie ribbons to, definitely not for function. A whole group of us would share those rickety bikes and you’d ride down a steep trail as fast as you can, with all the other kids shouting and running too. You really thought you knew it all, surely that moment you were the fastest person on the planet… until you realized you didn’t really know how to stop! That day I crashed so hard all air left my lungs, with a bunch of bruises, a handlebar in my ribs and a very new feeling of being very fragile and very sore.

It took a while to come back there, to overcome that fear of pain again, but my brother and I kept going to ride these tracks, much better with time - but not much smarter-, giving my mother a heart attack. It also became a good MTB training ground many years later –with working brakes, for a change! Cycling remained a passion since those dusty days and I would have never guessed that I’d still be playing in the muddy woods these days. 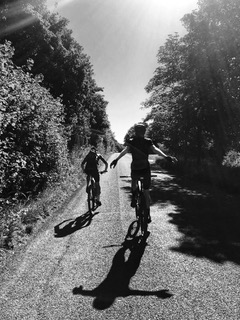