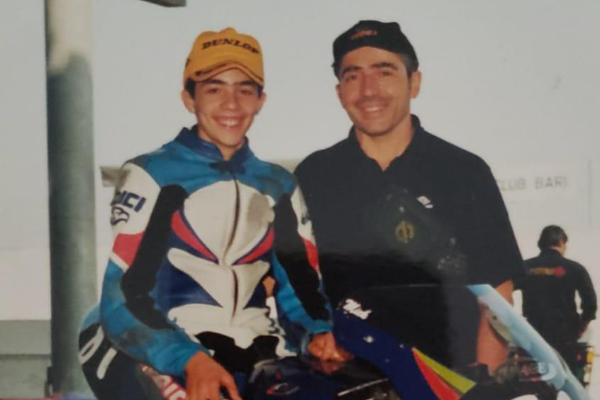 My father has always been in love with the motors and he would ride his scooter or drive his Ape-car, besides his predilection for touring motorbikes. In part I owe him the fact  that I started to race, as I was surrounded by this world since my childhood. Once, we were on vacation in Cattolica, I saw the tracks and I felt like trying the minimotos, as I was intrigued by this sport. I was already thirteen then, but I insisted until my parents took me to a track and I finally succeeded in having it my way.

I was born in Puglia, and my beautiful homeland has never had a motorsport culture. We went to a track next to Bari, about 200 km away from home, the only one that was homologated nationally, although it was in fact an autodrome. Starting was not easy, but I was driven by relentless passion and with lots of effort and great determination I managed to become a pro pilot.

In this photo I was 14 years old. It was one of my first times on the track. I remember I set good times on that occasion and both I and my father were super happy.

As you can see, I was wearing Sidi boots even then, and every little success I achieved was a great one for me; every time I felt I was rewarded for my effort. I admit it was hard to convince my family about the path I had chosen. A year after my debut, I had a severe accident damaging some of my vertebrae and I was forced to stay put for sixty days in bed.

Upon coming back I was stronger in racing than before, and my parents had to give up: I was born to race with the motorbike.