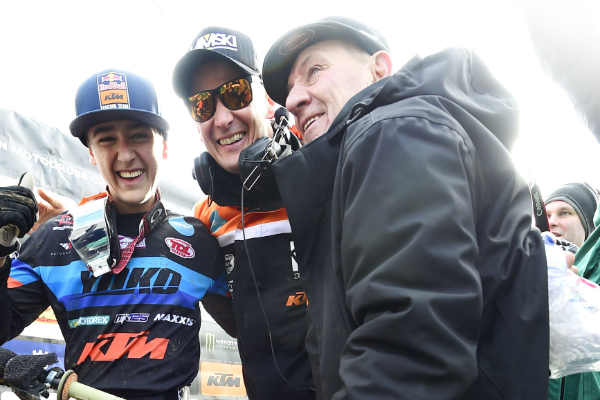 A generation of legends: when passion is a family affair.

The Everts' generations marked the last decades of motocross forever. Harry Everts was a four-time world champion, Stefan clinched the world title ten times across four different classes, while his son Liam is a rising motocross star.
Now father  and son talk together about their very first memories on a bike.

If I think about my first riding memory, I think of me on my first little Yamaha GTR 50, down the street, with a little bit of track as well as the fields. That was at home, and I started to ride very very slowly. I think I was about four year-old back then, and that’s how it all began. Given my surname, I have some responsibility in Motocross but I have always focused on myself and, with the same patience and determination I had at that time, I have followed my path only thinking of racing and living my passion for motorcycles to the fullest. I approached this sport in a very constant way without haste: it is important to find your own dimension and develop your talent. I remember that moment with great pleasure and I am happy to have been able to live that experience that led me to get to know the world in which my dad and my grandfather had left their mark.

My first ride was when I was four year-old. My father didn't push me to ride a motorcycle, but when I was born he was already racing in the world championship and I usually spent my time watching him racing. But one day he gave me a small Italjet - I think it is an italian bike. One of the first times I rode, I went straight into a concrete wall and I broke the front fork, the whole bike was bent, and little Stefan was shocked. I didn’t ride for several months - that’s what my parents told me. Then, I went back on the bike, because I felt that it was something I really loved. It was not difficult to make a decision, at 16 I became a professional rider; I was still in school but my heart and my head were absorbed by the races. I remember I definitely enjoyed riding my motorcycle so much, especially when it was raining and muddy. It was the perfect moment to go outside, get my bike dirty, open the throttle and see the dirt fly away. It was so much fun.  Also when I grew up, I still loved to hit the gas and look behind me to see where the sand and mud would fly to. At the beginning it was just fun, that passion became my profession later as I matured. So, this hobby became a job and racing will always be part of my life.